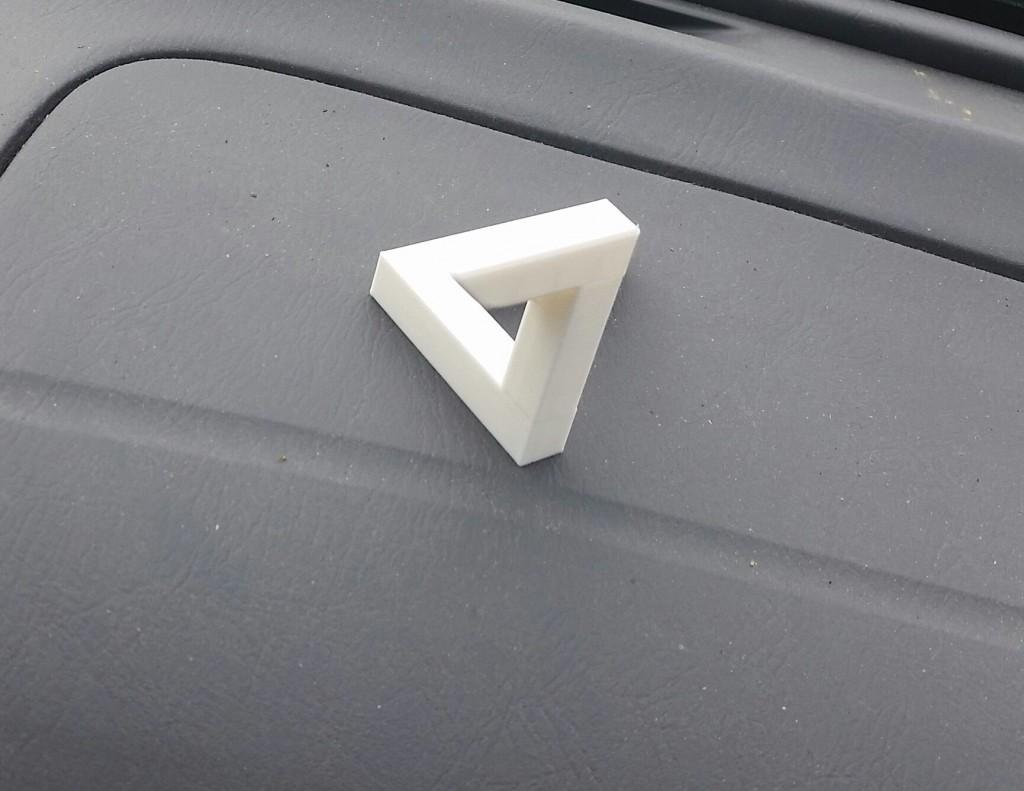 Has the “Impossible Triangle” Been Made Possible with 3D Printing?

Have you ever stared at an M.C. Escher picture until you grew dizzy or simply marveled at the way Escher configured angles and drew objects to trick the eye? Well, there’s no question Escher is a master of illusion, beckoning us to an imaginary world of complexity and perspective that teaches the lesson that not everything is “as it seems.” Or, better yet, things can appear as more than one thing at different times depending on how you look at it. The lesson of the optical illusion is a tough one: things aren’t what you think they are. Or, more specifically, things can be more than one thing at the same time, and your mind and sight can be tricked by something rather simple in the end.

I am pretty sure that my first encounter with an optical illusion was the picture of the old woman/young woman illusion. If you take a neck for a chin, a young Victorian looking woman, glancing sideways, becomes an old woman with a very distinctive nose and face. Mastering the feat of designing images that can literally look different than what they are is the point of optical illusions, and it now appears that someone has achieved the impossible and printed an “impossible triangle” that has one of the bases of Escher’s work and a great challenge for mathematicians and physicists alike.

One interesting aspect of Escher’s optical illusions involves the mathematical conundrum of the “impossible” or “Penrose” triangle — an object that appears in Escher’s work, like his famous print “Waterfall” (see right).  Recently the same illusion has been 3D printed, too. In 1934, the Swedish artist Oscar Reutersvärd created the first “impossible” or “Penrose” triangle and it was popularized in the 1950s by the mathematician Roger Penrose who explained that it is “impossibility in its purest form.”

Why is it impossible? Because it is a two-dimensional object made to look three dimensional — depending on the angle you perceive it at. An object of much fascination for science nerds, the impossible triangle presents itself as an object that seamlessly conjoins different sides of a triangle, but that depends on the angle you look at it.

The verdict is still out on whether this 3D printer succeeded in achieving the impossible. One “spoiler” in the post comments suggests that this is, of course, an optical illusion and if it was photographed at a different angle it would look quite different. The “spoiler” even claims that the original poster of the impossible triangle provided different photos on reddit (see below). Okay.  But if the impossible triangle has always been impossible, doesn’t the original poster deserve some credit for 3D printing an illusion?

If you want to figure this out for yourself, you can download an STL file of an impossible triangle from Thingiverse. As one person commented, “you can see the mark of where it ends. Good illusion though.” And that appears true. There’s another version of an impossible triangle, also on Thingiverse, that relies more obviously on the viewing angle to preserve the illusion.

The creator of the 3D printed impossible triangle gets credit from me for an imaginative take on a illusory conundrum that has baffled some of the great artistic and scientific minds.