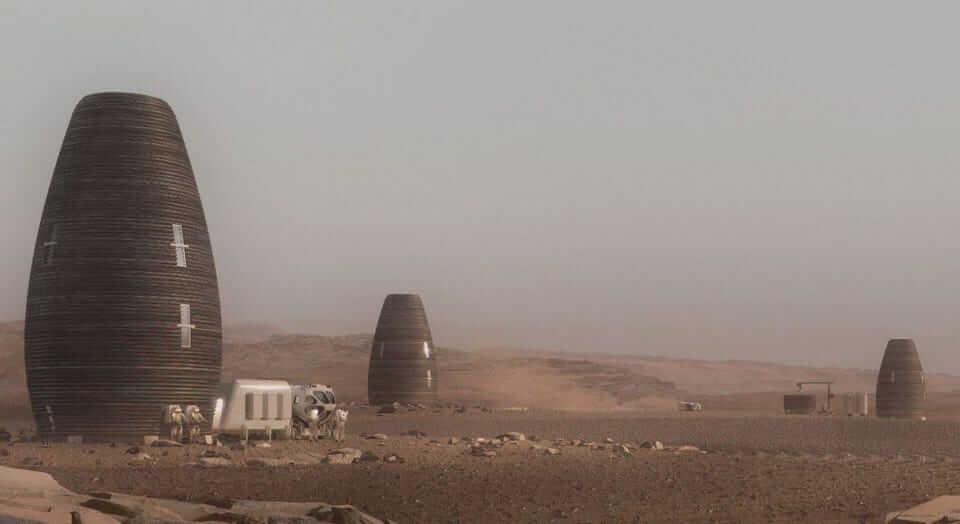 Space architecture firm AI SpaceFactory has unveiled their plan for a lunar habitat, which has been designed for additive manufacturing on the Moon’s surface.

The lunar structure concept, named “LINA” has been designed with inputs from engineers at NASA’s Kennedy Space Center, and marks the first time that the agency has collaborated with a private partner in lunar habitat design.

LINA’s will be 3D printed with a lunar regolith polymer composite made with materials found or manufactured on the Moon, and the structures will feature an ultra-thin shell with 3d printed load-bearing arches.

The thin structure will be buried under a 2.7-meter thick, protective regolith overburden. The result is a lightweight, mass optimized structure that functions as defense against radiation and the extreme lunar environment.

LINA is proposed to be situated at Shackleton Crater, on the Moon’s south pole, which contains water ice (for fuel, oxygen, and drinking) and something approximating a “peak of eternal light” on the crater rim, where solar panels bathed in near-perpetual sunlight could be used for virtually round-the-clock power generation.

Initially, AI SpaceFactory had developed a polymer that could in principle be manufactured on Mars, and they used a simulated Martian regolith to demonstrate this on their MARSHA habitat project.
In collaboration with Techmer PM, AI SpaceFactory developed a Mars plastic made from a mixture of basalt fiber, which can be extracted from Martian rock, and renewable bioplastic (PLA) processed from plants grown on Mars. This process is being modified to work with lunar regolith simulants.

“Developing LINA and printing in an environment that is void of atmospheric pressures or weather systems advances that technology through a new context, with new and more precise variables.”

Further testing is required on the material and the extruder system under vacuum conditions to determine the viability of the method. This will occur at the company’s new vacuum chamber which is located at NASA KSC.

The AI Space Factory extruder has been fitted to a custom gantry designed and built by NASA, and this printer has been installed in the vacuum chamber. This will in-part serve to simulate the conditions of the Moon where the plastic lunarcrete printer will hopefully end up. The first vacuum chamber prints will be attempted later this year.