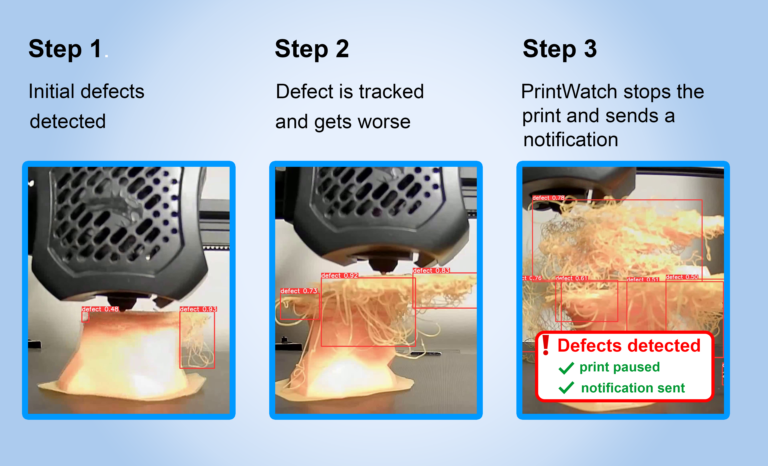 Printpal, a Chicago-based machine learning firm, has announced the launch of its new artificial intelligence-based defect detection software for use with 3D printers.

PrintWatch, which comes in the form of a plugin, utilizes a camera pointed at the build area of an FFF 3D printer. Leveraging machine learning, the software monitors 3D print jobs and determines exactly when a defect begins to form in real-time. PrintWatch is capable of tracking defects during the 3D printing process, taking reactive action if necessary.

According to Printpal, its new software offering is able to abort print jobs, turn off a 3D printer’s heat, and send status alert notifications to users. Essentially, the software is designed to prevent printers from carrying a defective print on for hours, saving time and filament while reducing the risk of hardware damage or a fire.

The backbone of the PrintWatch software is its computer vision capabilities. By running the real-time video feed through a proprietary machine learning model, the software can pick out spaghetti-like defects of various sizes, shapes, colors, materials, lightings, and settings. Printpal has trained its detection model using extensive real-world data in dynamic settings, meaning the software will be compatible with any FFF 3D printer.

Once a defect is detected, the software tracks it to see if it is actually getting worse, and only then does it intervene. This tracking approach is what prevents false positives, meaning successful print runs shouldn’t be cancelled by accident.

As well as detecting defects, PrintWatch also features an Anomaly Detection System that’s always running in the background. This system is designed to detect other anomalies that may occur in a 3D printer, such as an issue with the alignment of an axis. The Anomaly Detection System can be used to figure out the more subtle issues in a machine, allowing users to plan out any necessary maintenance.

Since PrintWatch runs all of its computation-heavy machine learning models in the cloud, users won’t need a high-spec computer to make use of the software. In fact, any system with an internet connection will do, including a simple Raspberry Pi Zero.

The PrintWatch plugin can be downloaded and installed from the OctoPrint Plugin Repository here. The software is also available as an API for the more tech-savvy users out there who’d like to program their own custom integrations of the plugin.

PrintWatch is priced at $9/month for one 3D printer. Each additional printer is $4/month.

Printpal is currently developing a locally running version of the software for use on machines without an internet connection. This offline version will be best-suited for industrial printing operations where network security is of importance.

The company is also working on a number of other AI-based systems for use with 3D printers. This includes software that optimizes the speed and quality of a build by analyzing the G-Code, an inference API for computer vision models that can detect objects, and software that integrates e-commerce into 3D printers.https://www.youtube.com/embed/ZgmmPorUxLU?feature=oembed&showinfo=0&rel=0&modestbranding=1&showinfo=0&rel=0&modestbranding=1

The 3D printing community has yielded several computer vision-based defect detection techniques in the past. One that comes to mind is the Spaghetti Detective (TSD), an AI-based software that utilizes the webcam of a printer or home computer to detect when a print job has gone wrong. Much like PrintWatch, once the software sees the extrusion of ‘spaghetti’, it interrupts the process and alerts the user through an email or text message.

Elsewhere, researchers Dr. Joshua Pearce and Aliaksei Petsiuk have also developed their own computer vision-based software algorithm capable of print failure detection and correction. Again, the open-source offering leverages just a single camera pointed at the build plate, tracking any printing errors that appear on the exterior or interior of the part on a layer-by-layer basis.

Looking for a career in additive manufacturing? Visit 3D Printing Jobs for a selection of roles in the industry.