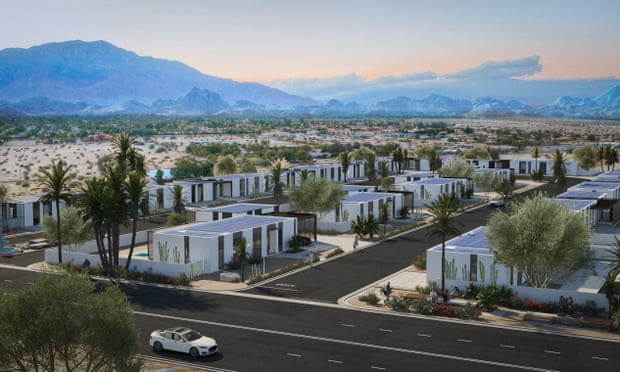 “The future of housing’: California desert to get America’s first 3d-printed neighborhood. Stating in the year 2025

Through a partnership between two California companies – Palari, a sustainable real estate development group, and Mighty Buildings, a construction technology company – a five-acre parcel of land in Rancho Mirage will be transformed into a planned community of 15 3D-printed, eco-friendly homes claiming to be the first of its kind.

“This will be the first on-the-ground actualization of our vision for the future of housing,” said Alexey Dubov, the co-founder and chief operating officer of Mighty Buildings.

In the large warehouse of its Oakland headquarters, Mighty Buildings creates homes using massive 3D printers the size of small garages. The material used by Mighty Buildings hardens almost immediately, allowing a roof, layers of insulation, and exterior features such as an overhang to be added all in one process. Up to 80% of the construction can be automated, Mighty Buildings claims, with 95% fewer labor hours and 10 times less waste than conventional construction.

The company’s printers have the capacity to make a 350-sq-ft home in less than 24 hours, said Sam Ruben, the co-founder, and chief sustainability officer of Mighty, during a recent tour of the headquarters. Often the printers are set to build a house overnight, while the employees are asleep.

“We are actually limited more by road transport of the buildings than the actual ability to print,” Ruben said.

The Rancho Mirage homes will each feature mid-century modern architecture and consist of a three-bedroom, two-bath primary residence of 1,450 sq ft, along with a secondary residence on the property of two bedrooms and one bath.

Each home’s 10,000-sq-ft lot will have a swimming pool in the back yard and the option to pay extra for amenities such as cabanas, hot tubs, fire pits, and outdoor showers. Prices will start at $595,000 for a base 3BR/2BA model and go up to $950,000 for a two-home configuration with upgrades.

The rise of 3D-printed homes comes as California’s housing crisis continues to rage. The state needs between 1.8m and 3.5m new housing units by 2025 to address the shortage and accommodate projected population growth. In February, Mighty Buildings secured $40m in series B funding.

Ruben said that while Mighty Buildings had spoken with local governments about the potential to 3D print homes for vulnerable populations, the company was largely focused on targeting what he calls “the missing middle”.

“The missing middle is too often left out of the conversation,” he said. “These are your teachers, your firefighters, people who serve a community, but because of how insane the housing market is in California, they have never had the opportunity to buy a home.”